Paul Glatzel made his first start in six months for the Liverpool under-23s on Monday, with the striker “in a good place” as he bids to revive his fortunes at the club.

Almost two years ago, Glatzel was on the fringes of Jurgen Klopp‘s first team – now, he is working his way back to full fitness after a hellish run of injuries.

This season, the 20-year-old has played just eight times, with Monday afternoon’s 2-2 draw with Leicester only his third start of the campaign and his first since December.

He impressed, teeing up Leighton Clarkson’s opener and winning the penalty for Ben Woodburn to make it 2-1, having shifted to the left wing after an early sending off for Morgan Boyes.

It remains to be seen whether Glatzel can work his way back into the senior setup, given how much time he has lost, but U23s manager Barry Lewtas is ensuring he is in the best position to do so.

“He probably could have played for a little bit longer but I was keen to get another midfield player on and it was his first game back,” Lewtas told the Liverpool Echo.

“He was playing in a different position and the amount of effort he put in, that was why we took him off, but there were no injury problems and he has been training really well.

“We have not been overly cautious with him and he is in a good place.” 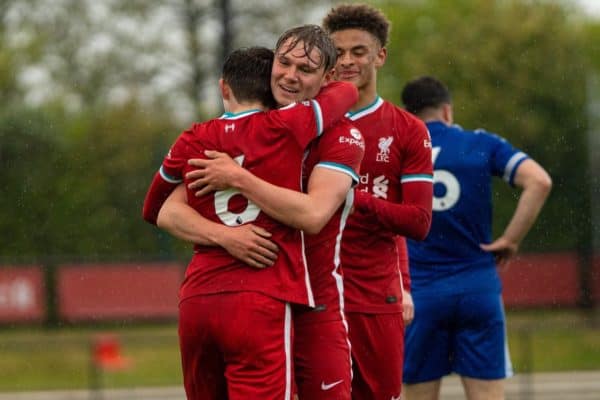 With Glatzel physically fit and sharp on the pitch, Lewtas believes his mentality sets him apart as a “real team player,” which could well earn him a place back in Klopp’s reckoning.

“It would have probably helped if we were playing 11-vs-11 and he was able to get a little bit closer to goal but it shows his versatility,” Lewtas continued.

“He is a great kid. I know I put Elijah [Dixon-Bonner] at right-back but if I asked Paul to go there, he wouldn’t be happy, but he would play for the team!

“He is a fantastic personality and character, great for the team, and is a real team player. I can’t speak highly enough about him.”

No longer a teenager, Glatzel looks to have bulked up significantly during his time on the sidelines, and he has retained his touch, creativity and cutting edge in the final third.

As Klopp faces a disjointed pre-season with the likes of Roberto Firmino, Mohamed Salah and Diogo Jota expected to return late from international duty, it could be that he turns to youth to flesh out his ranks.

And if he is given another chance, Glatzel will be desperate to make up for that lost time.