Fabinho has been named in the starting XI for tonight’s all-important clash against Chelsea, one of the two changes made by Jurgen Klopp.

With only one point and one place in the table separating the two teams before kickoff, tonight’s clash is one that could hold great significance in the race for the top four.

The Reds return to Anfield after notching a much-needed win on the road last time out, injecting some much-needed positivity as an unbeaten Chelsea side under Thomas Tuchel lay in wait.

Klopp has been boosted by the re-emergence of some key figures, starting with Alisson‘s return between the sticks.

In defence, Fabinho slots back in at centre-back alongside Ozan Kabak, for the 19th different pairing this season, with Andy Robertson and Trent Alexander-Arnold remaining at full-back.

With Liverpool’s No. 3 at the back, Gini Wijnaldum holds on to the No. 6 role and is joined by Thiago and Curtis Jones.

And for the sixth game in a row, Mohamed Salah, Sadio Mane and Roberto Firmino lead the attack.

The options off the bench are as strong as they’ve been in recent times, with Diogo Jota back in the matchday squad for the first time since December. 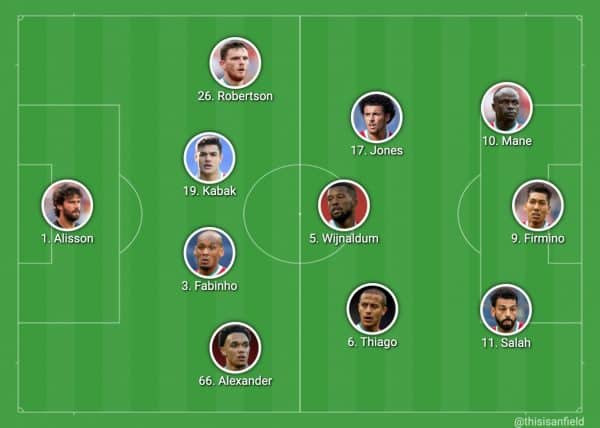